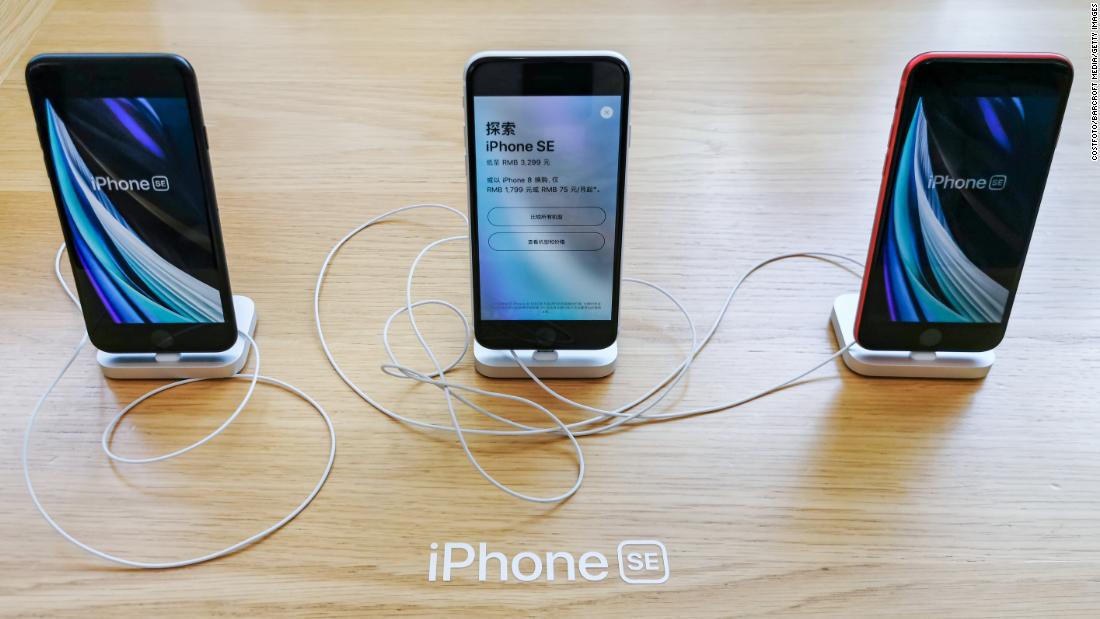 But this time, it started with a virtual presentation and ended with me stepping out my front door with gloves, Clorox wipes and hair that hadn’t been brushed since who knows when to anxiously disinfect a package from Apple. All the glamor of a typical iPhone launch was gone.

And yet, once opened, the device itself — the new, lower-cost

— felt like a throwback to a simpler time when consumers stood in long lines on the street for a new gadget rather than toilet paper.

The SE device, which began shipping to customers on Friday and comes in white, black and red, takes us back to 2017, when

launched the iPhone 8. On the surface you could easily mistake the SE for that three-year-old model with its design, home button and bezel frame.

Starting at $399, it’s by far the most affordable new iPhone at a time when many households may struggle to justify the

of Apple’s flagship smartphones. More than

26 million people are out of work

in the US alone and many others may worry about joining those ranks.

With its smaller screen and the return of features like a Touch ID button, it’s immediately familiar when practically everything else in our lives is very much not. And even some of the features that Apple forfeits in the SE feel oddly prescient and appropriate. After all, what good is it to default to relying on facial recognition to unlock a device when so many of us now must cover our faces daily with masks?

What you really need in 2020 is a device that lets you video chat and email, and doesn’t break when your toddler throws it on the ground.

When we emerge from quarantine, however, we’ll need something more. The good news is the SE is more than just a device that’s nearly half the price of the $699 iPhone 11; it works nearly as well.

The specs you’ll care about whenever the pandemic ends

This is Apple’s second-generation iPhone SE. The original, which sold for $399 when it was introduced four years ago, packed the internals of the 4.7-inch iPhone 6 and the 5.5-inch iPhone 6S Plus into the 4-inch body of the iPhone 5, serving as an alternative for people who didn’t want a bigger device or the price tag that comes with it.

Now it’s back, and so is the home button and Touch ID over the newer option to unlock through facial recognition. It’s hard to shake the habit of swiping up to close out of apps like you would on newer models, but there’s also something nostalgic about pressing a physical button again.

The same is true of the smaller size screen, though it can take some getting used to for those who’ve turned to larger devices in recent years. The display choice is striking too, with less pixel density than what’s on the iPhone 11 and bezels around the frame that take up a good bit of screen real estate. Articles, 4K videos and games once again compete for space with the black perimeter intact, making the experience a bit less immersive.

The iPhone SE only has one rear camera lens compared to the two you’ll find on the back of the iPhone 11 (an extra for landscape shots), and the three on the iPhone 11 Pro (another for zoom effects). But coupled with the new processor, the iPhone SE can do more than you’d think. Portrait mode on the selfie camera is especially notable, considering the front camera system touts just one lens. Pictures are crisp, vibrant and can easily be adjusted with lighting tools, depth-of-field control and image stabilization.

What’s noticeably lacking, however, is Night Mode and slow-motion selfies — features that are hardly dealbreakers and would go mostly unused right now anyway. Concerts are now held in rock stars’ living rooms, rather than low-lit venues, and there’s only so much you can do creatively with a “slofie” from the confines of your couch.

Meanwhile, the SE’s battery life gets you solid usage through the end of the day, although how much longevity you need from it now when a charger is always nearby isn’t as critical as you would on a long commute home. It does feature wireless charging; something you won’t find on most budget devices.

It’s also important to keep in mind the pandemic will likely have a significant impact on Apple’s product plans for the year. In the fall, the company is

to be launching four iPhone 12 models, but some analysts

it could delay the launch of the much-anticipated 5G iPhone until consumer appetite returns. Considering that device will likely cost well into the mid-$1000s,

it may be long

past September before people feel comfortable spending that much on a gadget.

The iPhone SE may not be for everyone, but its back-to-basics approach is everything we need right now to meet our needs during the quarantine and whatever comes after.